I will show some example images and videos of my AN nodes in use and explain how I made the various pieces. All of these examples will feature at least one of my own nodes and some of Jacques excellent AN nodes as well. 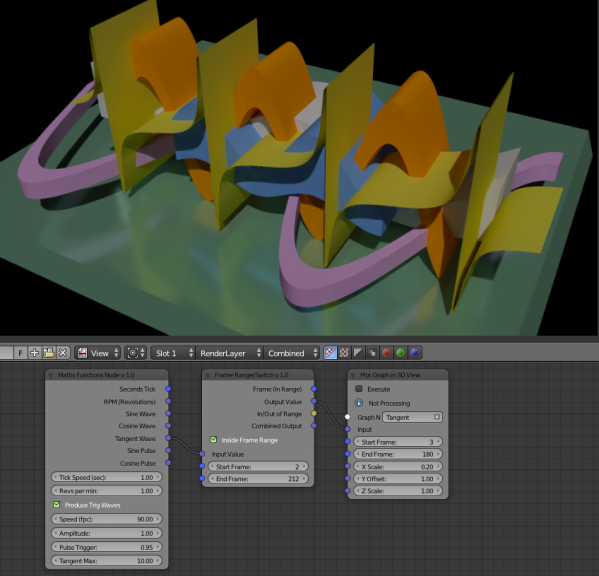 I made various graphs derived from sine, cosine and tangent input into the graph plotter. Then I joined all these graph meshes together as one object and extruded the edge loops in various directions, also using “Bridge Edge Loops” to join some of the graphs. It was then a simple case of assigning materials and rendering. You can see the node tree to do this, although it was varied in settings for each run. 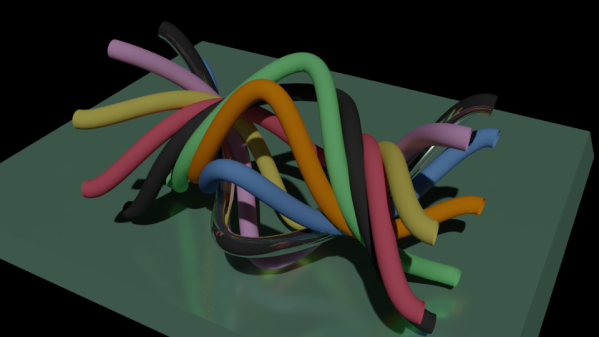 You can see in this example I have fed the Input socket with a cosine of frame divided by 15; this spaces the wave over 60 frames. I then fed the Y Offset socket with another cosine wave spread over 120 frames and multiplied this by 5 to set a variable Y value. The Z scale is set at 2, this produces a graph that is sinusoidal in both Z and Y values, but a different rates.

Next I converted this graph to a curve (ALT+C) and then added a Bezier Circle profile. Then I assigned a material to the curve’s vertices in EDIT mode, duplicated and rotated them, assigned another material to the selected vertices and repeated until I had 8 sets of vertices at 45 degree spacings.

So, with this one I used the same two of my own nodes as before, but added a Frame Ramp node to gradually reduce the Z scale over the animation: 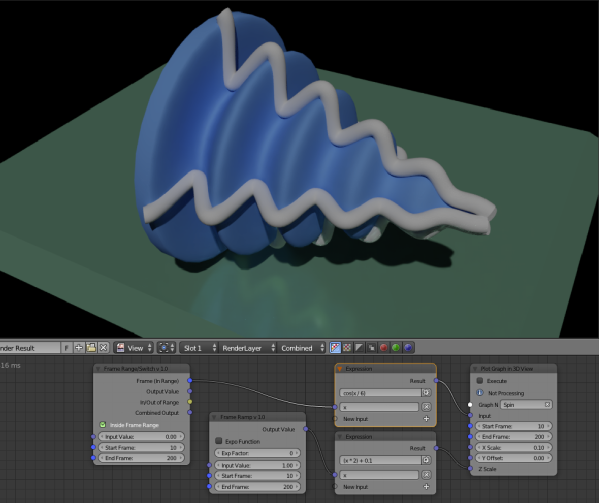 You should be able to see how I used my Frame Ramp node to reduce the Z scale over the frame range. I kept the Z value to a minimum of 0.1 by the formula in the lower Expression node. The node doesn’t not like the Z scale to be 0, it throws a hissy fit and stops working as soon as the Z scale gets to 0, typical Prima Dona node!

I made this video using my MIDI Bake To Curve Node and quite a lot of standard AN nodes:

Here we see Erkinator enjoying some “leaves” 😛 while watching the organ play with itself. The keys and pedals all move to MIDI events, whilst the orange columns on top are driven by Sound Bake nodes. Suffice it to say there are quite a lot of nodes here!

Thomas Arne provided the notes, I played them on my TMK88 through Reason – just look it up if you don’t know what that is.

This next one uses the Sound Bake node from AN and my Graph Plotter: 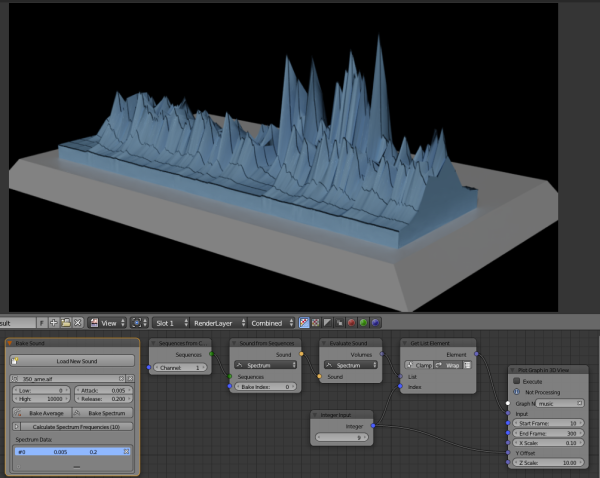 For this one I added a sound file to the project, then used the Sound Bake node from AN to bake a 10 channel spectrum from the sound file. I then used the various nodes you see above to get to one volume. This I fed into my Graph Plotter 10 times to create 10 graph meshes, which I joined into one object.

Next stage was to use each of the ten profiles to make the surface mesh using Bridge Edge Loops. I kept copies of the profiles and used these to make the dark lines, by small extrusions and a solidify modifier. So 3D sound interpretation from a sound file using Sound Bake nodes from AN.

This video is made from many MIDI channels driving through several loop sub-programmes:

Far too complicated to show everything, but the node tree is on the Animation Nodes page. I did the music on my TMK88 and Reason. Animation uses Armatures, Shapekeys, all sorts of stuff!

Here’s my latest Animation Node experiment, fluid simulation powered by Animation Nodes and Clockwork Magic, more on this later, but the fluid responds to the acceleration of the beaker (shown cut-away so you can see the fluid), then it sloshes back and forth slowly, or quickly, decaying in amplitude until at rest.

This meant building a new node to do all the maths and it will need some refinement before publish it.

Here is a second video, with multiple beakers of fluid of varying viscosity and one with a concave meniscus:

Here is the node tree, each beaker has a separate section, as I am using different values. I will try to work out a way to use a Loop Sub-Programme instead at some point as this might be more efficient. 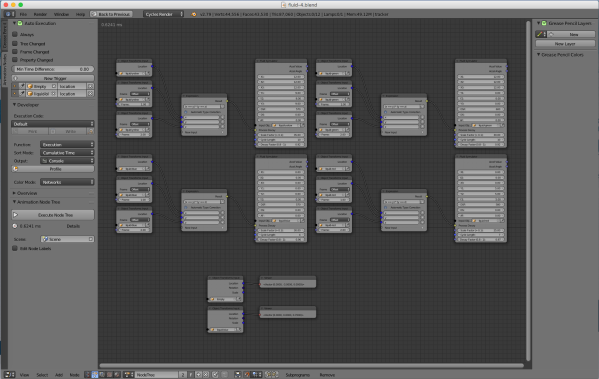 The fronts of the beakers are missing so you can see the fluid, it’s not a mistake!

Hey Clock, are you ever going to finish anything on your website?