The “Old Girl”, my glider has just passed her major glue inspection, been weighed, I won’t publish the figures because ladies, apparently, don’t like you discussing their weight!

Here she is in the hangar after rigging, weighing and testing, you can just see my mate polishing the fin.

A group from my gliding club went to Sutton Bank last week, 8-12 September 2018 in case you read this drivel after this week…. We took our DG505 glider in its trailer and played around in the wave lift, caused by westerly winds hitting the Pennines and bouncing up and down. Here is a similar plane just after it landed on the same day. 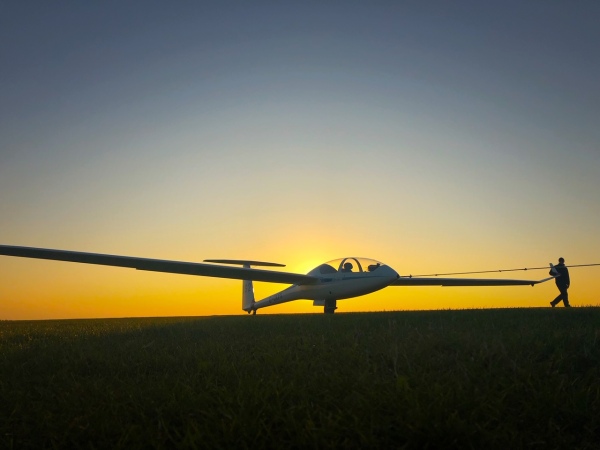 Here is the trace from the flight:

You can see it took a sod of a long time to get away from the ridge, at times we struggled to maintain height there, but once we got high enough to push out into the wave, it was just a case of “watch the altimeter go round”. We had not got an oxygen system in the glider, so had to stop there and come back to ground. This we did by putting the nose down, accelerating to 110 Knots and found the sinking air on the opposite side of the “wave”.

Thanks to Paul for the glider photo and Bruce for being brave enough to sit in the back seat with me at the controls!

Here’s a couple of photos from the journey upwards:

We ended up way above these low clouds on the ridge.

I may do more stuff here on my gliding, if anyone is interested…..